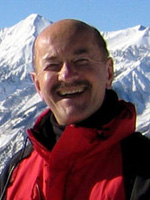 Gary M. Hieftje is Distinguished Professor and Mann Chair of Chemistry at Indiana University in Bloomington, Indiana. His research interests include the investigation of basic mechanisms in atomic emission, absorption, fluorescence and mass spectrometric analysis, and the development of instrumentation and techniques for atomic, molecular, and biomolecular methods of analysis.

He has won numerous awards in the fields of analytical chemistry, chemical instrumentation, and spectroscopy, has held major offices in several scientific societies, has delivered many named lectures, and has served on the editorial boards of many major journals. He is the author of over 600 publications, 13 books, 20 chapters, and 21 patents. To date, 70 students have received doctorates under his direction; many others have received M.S. degrees, and scores of undergraduates and visiting scientists have performed research in his laboratories.